Throughout this series, I have been describing the unique features of the adolescent brain and how its development is influencing your child’s behavior and decision-making process. Dopamine, a neurotransmitter, is ramped up during adolescence and contributes to the changes that are seen during this important developmental time. Dopamine impacts the brain’s reward and pleasure centers and is associated with competitiveness, aggression and the thrill of risky adventures.

Another part of the brain, the prefrontal cortex, enters a rapid time of development during adolescence. The prefrontal cortex is responsible for planning, impulse control, attention, and self-awareness. If you put together the combined effects of an immature prefrontal cortex and a brain flooded with dopamine, one outcome is an adolescent who seeks risky behaviors using little common sense.

What about the consequences? 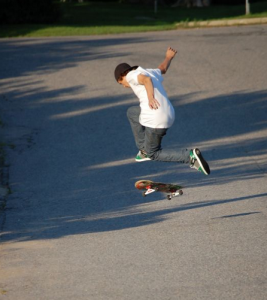 My 12-year-old grandson is a thrill-seeker. He is an avid lacrosse player and recently became part of a football team. To be good at these sports, you need to take care of your body but he also likes riding his bike on challenging canyon pathways and particularly enjoys jumps. One impulsive, risky jump left him with a broken arm and the inability to play on his football team at the beginning of the season. It would never have occurred to him at the moment he contemplated the risky jump, that there could be negative consequences.

“What were you thinking?” is a common question asked by parents when their child is an adolescent. Sometimes it’s remarkable what they think of without even considering where this behavior will take them. They need lots of guidance during these important years to compensate for the immature parts of their brain. You will notice with each year of growth, your child becomes more aware of outcomes and begins to temper their enthusiasm for risk.

Neurons, cells in the brain, form pathways that communicate information from one part of the brain to another part. A way that you can help you child during this developmental time is to teach them how to think through their plans. By sitting with them and talking through each step of an idea, you are reinforcing important pathways in the brain. They probably won’t like this activity very much, but perseverance will produce amazing results. When our children were very young, we carefully taught them how to safely cross the street. It took several learning sessions before they got it. Teaching them to think through their plans as adolescents and consider the outcomes is similar. It will take numerous teaching sessions to get your point across but it will be worth it.

You are the most important role model in your child’s life.
What do they see when you need to make a decision? How are your planning skills?

Go here to read parts one through four of our Parenting Adolescents Series….
Part 1: Are You Ready?
Part 2: Rethink Your Style
Part 3: Family Disruption
Part 4: Self-Awareness