You are here: Home / Blog / Girls / 10+ Year Old Girls / How To Teach Your Daughter About Puberty | Lesson 2: Breast Development

Now that spring is here, it is time for summer clothes and swimsuits. There will be surprise on some mom’s faces when they notice their 9-year-old daughter is starting to show some breast development! It is hard to believe that a girl this age is in puberty, but the timing is right and breast development is a sure sign. 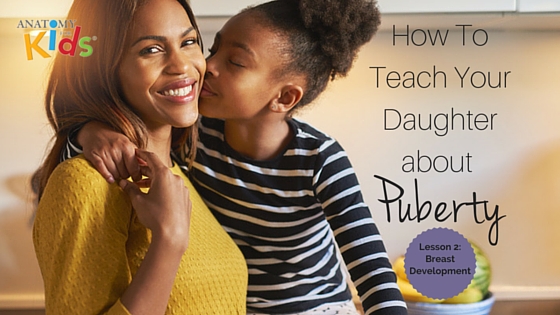 This is the second lesson in a series to help you prepare your daughter for puberty. In the first lesson, I discussed the basics of female anatomy including the ovaries, uterus, fallopian tubes and vagina. This time, I’m going to describe the breasts and changes that your daughter will notice at the beginning of puberty.

One of the first signs of puberty for most young girls is a change in their breasts. As young as 8 years old, hormones from the ovaries tell breast tissue to begin to grow. The result is little lumps found beneath the nipple that are called breast buds.

So what should you teach your young daughter
about her breasts?

Let’s begin with the structure. This illustration is from my book, I’m A Girl, Hormones!.

Before puberty, the breast is formed mostly of ducts. At the beginning of puberty, a hormone called estrogen is produced by the ovaries (see Lesson 1: Basic Girl Anatomy for more!) and travels in the blood to the breasts. Estrogen is what tells the breasts to form breast buds.

It is also useful to explain that some girls get breast buds on one side first and then a short time later they appear on the other side too. Or you can get them on both sides at the same time. Whatever happens for your daughter is normal for her. Also, she might notice that their breasts might feel a little sensitive as the breast buds form. This is normal too.

Next, I will talk about skin changes and what to share about those. Then in a later lesson, I talk about teaching your daughter about her menstrual cycle and she will learn that the breasts go through changes during this monthly cycle as well.