Each year No-vember becomes Mo-vember as the Movember Foundation takes over to promote men’s health awareness around the topics of prostate and testicular cancers, poor mental health and physical inactivity.

This is also a great opportunity to consider what your son needs to know about his body and health as he approaches puberty. 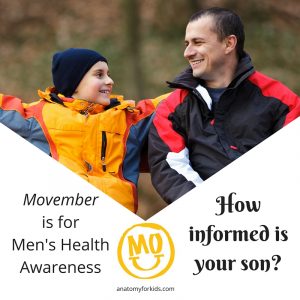 It is generally accepted that girls entering puberty need to understand what is about to happen in their body because they are going to start having a menstrual period. Boys need puberty education too! As we educate them about their bodies NOW, they will be equipped to take better care of themselves later, and be aware of any changes that could signal illness or disease.

However, there is simply not enough information available to teach boys about the changes they are going to experience. This is complicated by the fact that boys are generally not as enthusiastic about having these discussions, especially as they get older.

So what are parents supposed to do? Start Early!

A good plan I would like to suggest is to begin talking to your son as early as possible about his reproductive system. A great place to start is by teaching young boys about their genitals. I have noticed that moms are great teachers when their little boys are potty training. They use the correct anatomical terms and freely answer the child’s questions. They even do some comparative teaching when their little boy asks questions like how girls pee without a penis. These conversations are easier because they usually do not involve sexual questions.

It is important to keep the conversations going through your son’s early elementary school years. He might ask questions that could be considered sexual in nature, but they are really too young to understand what they are asking. A simple response will satisfy him.

One thing he has probably noticed around this age is that his penis is different than some of his friends’. You can explain to him that the end of the penis has a little hood of skin on it. Some parents choose to remove that skin, which is called circumcision. Removing the skin does not change the way the penis works, both still do the same things. It is also helpful to reassure him that his penis is normal.

This is also a good time to explain to him that his scrotum is very sensitive and that he needs to protect this area. If he gets hit in the scrotum, it will hurt a lot! This is the way the brain lets you know to be careful because inside the scrotum are the testicles and this is where sperm are made.

As your son approaches eight or nine years old, it is time to add more detail into your discussions. Now he needs to learn more about sperm, where they come from, and what they do

By the time your son is about ten years old, if you haven’t talked about it already, it is time to discuss erections. Erections involve the brain and not hormones so even baby boys can have an erection. During puberty, erections can happen when your son is least expecting it like during class or when he wakes up in the morning. These are called spontaneous erections. He will be concerned something is wrong unless you explain to him this is normal.

This list is just the beginning of topics to discuss with your son as he matures toward puberty.

I love that the Movember campaign for men’s health awareness reminds us how important health education is for our young boy’s futures too.