It is always interesting to have talks with small groups of girls who have recently started having regular periods. They cautiously make their way into a questioning time about how boys are different. They almost sound like they feel guilty asking me about this.

If your daughter has already begun having regular periods, this is the time to begin teaching her about boy anatomy and the changes boys are going through during puberty. These are not discussions about sexual topics, just simple structure and function. 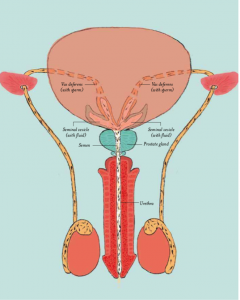 This illustration from my book I’m a Girl, How Are Boys Different? is a great reference for those talks with your daughter. The important information you want to mention:

During puberty, the testicles begin producing sperm and within a brief period of time while the testicles mature, 1,000 sperm are made every second!

Also during puberty, the male glands start producing fluid to support the sperm. These changes happen because of a hormone called testosterone that is also made in the testicles.