You are here: Home / Blog / Girls / 10+ Year Old Girls / What’s the Difference Between Puberty and Adolescence?

The terminology can be confusing when your child is no longer a child. The next stage is called adolescence. It begins at about 10-years-old and lasts into their early 20’s. This is the age when their brain is rapidly developing and you will notice progressive changes almost daily as they mature during this time. They are becoming young adults. 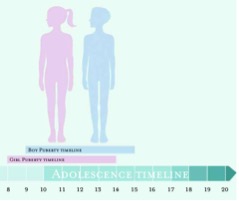 Puberty refers to the maturing of your child’s reproductive system during the early years of adolescence. For girls, puberty begins at about 8-9 years old and for boys about a year later. It only takes a few years to complete puberty. For girls, this means having consistent periods.

For boys, it means being able to have an ejaculation. When puberty is complete, the adolescent is sexually mature, but brain development is still going on at a breath-taking pace because they are still in adolescence.