Spontaneous erections, wet dreams, hair growth; boys are uncomfortable talking about all these things and especially with their parents.

However, we know they have questions. And we realize that what they learn about their bodies now will help them to make healthy, informed choices in the future.

I would like to share the top 5 questions I get from parents about HOW to talk to their son about puberty and about the changes he’s going through. 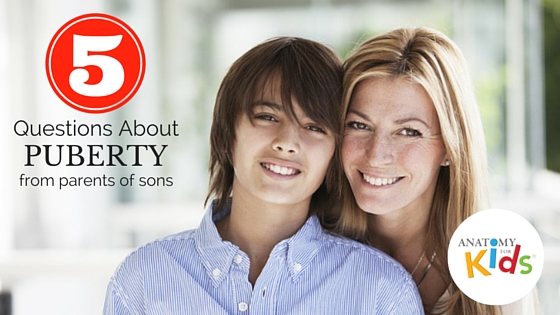 How do I start a conversation with my son about puberty?

The answer to this question depends on the age of your son. I always encourage parents to start conversations about puberty before they start puberty when they are still willing to talk to you about it. Eight years old is a good beginning time because he is in the early days of puberty. Try to make your conversations casual and don’t say too much at a time. On my website, you will find a blog that I wrote that specifically addresses the topics you can introduce in this age group.

If your son is older than 10, you have probably noticed some resistance on his part to get into a conversation with you. Most boys tend to become very private about their bodies by this age. They want to know the information about puberty but they don’t want to hear it from their parents. I suggest that you locate great resources and casually leave them for him to read on his own. Be careful with the words that you use in conversations with him and make sure you don’t make a joke out of puberty. It is truly surprising how easily they are upset by comments from parents.

Why does my son suddenly want to argue about everything?

Puberty is a time in your child’s development when he starts down the path toward maturity. The brain is wired to set that process in motion and for it to happen the child must begin to distance himself from his parents to become more independent. You will notice that he wants to be with friends more than with family. He will push against efforts on your part to make all of his decisions for him. It might feel like he wants to argue all of the time when actually what he is doing is establishing his own point of view. You have entered the time of “renegotiation”. If you get really good at this, there will be less arguing and more honest conversation.

Why is my son choosing activities that are so risky?

You have probably already noticed some of the more obvious signs of puberty in your son like a change in his body odor and he might even have some pimples on his face. But there is also a tremendous developmental surge going on in his brain. Powered by a big splash of dopamine, a neurotransmitter in the brain, he is energized to push himself to the limit. Dopamine gets credit for the risky behavior that you have observed. This is complicated by the fact that his prefrontal cortex, the part of the brain behind the forehead, is not fully developed yet and so his planning skills are limited. This is just not a good combination, risk taking without good judgment! He still needs boundaries but keep in mind that pushing those boundaries will be part of his risk-taking behavior.

Does it matter which parent talks to their son about puberty?

This past year while I have been writing my new book, I’m A Boy Hormones!, I have had numerous discussions with 10-14 year old boys. I have been surprised to hear most of them tell me that they prefer talking to their mom about puberty than their dad. I think this might be the result of years of mom giving advice to her son about what he eats, his sleeping habits, and tips for taking care of himself. I think it is best if you can work as a team because both of your perspectives are important for him to develop a healthy perspective.

When do we need to have conversations about sex with our son?

This question is dependent upon the age of your son and his emotional maturity. If you have not had any discussions with him in the past, I would suggest that you teach him about his own body first. Explain to him that puberty is the beginning of his body preparing him to have a sexual relationship in the future. He should know where sperm are made and where the fluid comes from that forms semen.

This illustration from my new book, I’m a Boy, Hormones! describes the pathway of semen formation. Sperm and fluid form semen.

Next, talk about the female reproductive system and show him this illustration from the same book that includes the vagina, uterus, fallopian tubes and ovaries. He can follow sperm from the vagina to the eggs in the fallopian tubes where conception takes place. You will find a more complete explanation in my book.

I prefer talking to young boys about reproduction first and sexuality later. Let’s get the basics done first.

Whether it is mom or dad, brief discussions that begin as early as 8 years old are far better than one “big talk.” That was a unanimous response from the boys I talked to about this. My new book will be a wonderful resource for you and your son as he continues to grow into a young man!