Knowing that a daughter’s first period is going to happen soon, inspires parents to teach her about what is changing in her body and how she can be prepared for fluids discharging from it.

But, boys who are in puberty are also going to encounter a fluid situation. 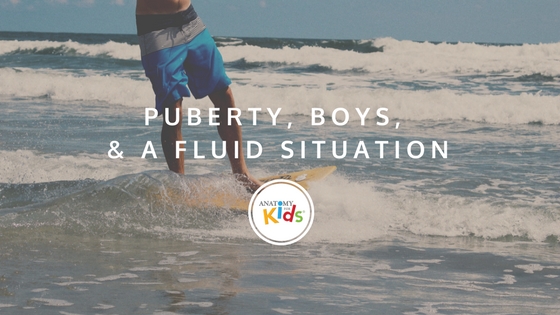 I believe we should prepare our sons for this big change in their body as well.

Along the tube system that carries sperm from the testicles to the penis, are glands. A gland is a clump of cells and all the cells produce the same product. In the male reproductive system, the main glands are the two seminal vesicles and the prostate gland.

These male glands produce fluid to help nourish the sperm and facilitate their transport out of the penis. What is interesting is that they do not start producing their fluid until puberty because they need testosterone and the testosterone levels are not high enough until then.

So how will your son know that these male glands have started producing a fluid in his body?

Normally, release of the fluid happens during orgasm. The brain tells the male glands to squeeze out their fluid in a specific sequence so that the sperm and fluid combines at the beginning or base of the penis. The mixture of sperm and fluid that leaves the penis is called semen.

The reason it is important to talk to your son about this is because he’s getting ready to experience something new.

One of the challenges for a young boy in puberty is waking up in the morning with wet sheets. At first, he likely thinks he has wet the bed, but further checking reveals a sticky white substance and not urine. What he has experienced is called a wet dream, or a nocturnal emission. This can be a disturbing event for your son if he has not been prepared for it.

If you have a son in puberty, now is the time to prepare him for the new experience of fluids being produced in his reproductive system.

Even though it may not be a conversation he wants to have, he will be thankful there are no surprises as far as the changes to his body are concerned. This can also set the stage for more conversations about sexuality and sexual health in the future helping him make healthy decisions for as he matures.