Although they might not say it out loud, boys notice the changes happening to their friends who are developing at different rates than they are during puberty. Some will have genital development and facial hair early and start to look more like young adults. Others of the same age might not have had any obvious changes of puberty and still look like young boys. 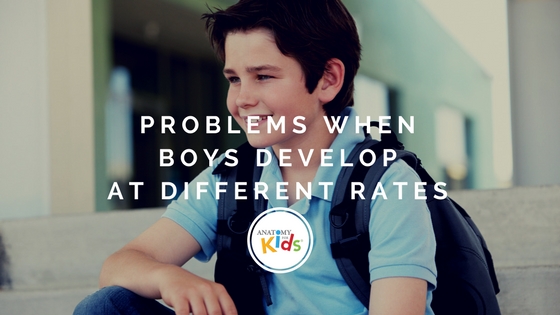 No matter which pattern your son follows, it can be challenging for him.

The boy who matures early may no longer feel like he fits in with the friends he has had throughout school. He sees that he looks different and he feels different inside. He has an interest in girls now, and they in him. When he is at his sports practice or in PE with others his same age, everyone notices the changes in his body. He feels embarrassed and out of place.

If your son is more of a late-bloomer, he suffers from many of the same uncomfortable feelings as his more mature friend. He has difficulty relating to long-time friends because he doesn’t feel the same way they do and certainly, girls are not of interest to him yet. He is probably smaller in stature than his more mature friends and this can put him at a slight disadvantage in sports. He might still want to be with his family more often and says NO a lot to his friends who want to hang out away from home.

Whether your son is an early- or late-bloomer, your response is the same.

Be As Sensitive and Supportive As You Can

It’s Not Just the Girls Who Are Changing

We speak often of the emotional challenges that your girls experience during puberty, but young boys have many of the same challenges. Girls tend to talk about it more and boys tend to hold their feelings inside.

It might be helpful to at least open a discussion about the fact that boys develop at different rates and see how your son might be feeling about how he is fitting in right now. Certainly, he has noticed the difference and might be concerned that he is not normal. He probably won’t want to have a big talk about this, but at least open the door for him to walk through.