If your son is 15+ years old, it is time to talk to him about contraception. This encouragement is not because you are concerned that he is having sex now. It is to prepare him for his future when he is no longer at home with you. We want to make sure he is making informed decisions.

He has likely already heard the expression “safe sex.” The condom is the popular contraceptive for boys to use to prevent pregnancy. In this illustration from my book, I’m a Boy, Sexual Maturity, the logic behind using a condom is obvious. 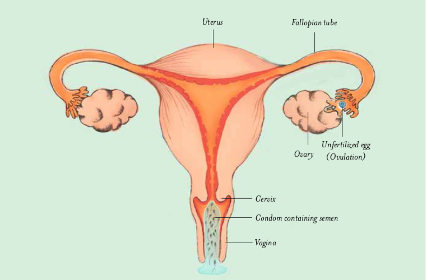 There are about 100 million sperm released during a single ejaculation. A condom is about 95% effective in keeping sperm from entering the girl’s reproductive system and finding their way to a fallopian tube. You can never to absolutely certain if there is an egg waiting there or not. It is best to be safe and collect the sperm inside a condom.

If your son understands this one simple concept about condoms, you have been successful at informing him as a young adult. The rest is up to him.

Condoms also provide protection from many of the most common Sexually Transmitted Disease (STD). This is also important to know, and is a topic for another blog.