You are here: Home / Blog / Boys / 11+ Year Old Boys / Learning to Say NO | A Critical Communication Skill for Teen Boys

As adolescent boys mature into young teens, one of the most important responses they must begin to master is the appropriate use of the word “No.”

When they were younger, you said NO for them. Now they must learn to make good choices for themselves that will often mean saying NO. 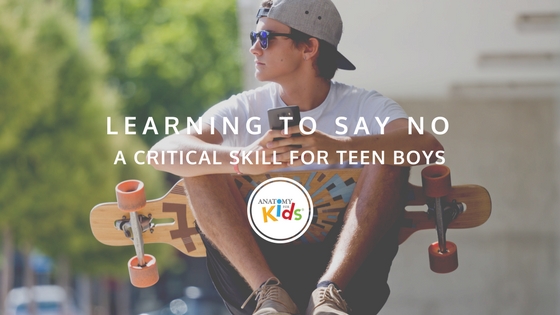 In their peer relationships, friends are going to ask them to do things they know they should not be doing. Many of these relationship challenges will come up every day. Here are a couple of examples.

Part of maturing into a young adult means having your own opinion. A personal challenge for some adolescents is disagreeing with their parents. It’s very important they learn how to disagree in a respectful way. We want them to have their own opinion so let’s help them learn how to express what they think in a way that we can hear them.

The important point here is not that they say NO to you but how they say it. You can help them with this by hearing them out and trying to find some common ground. This does not mean you should allow them to speak disrespectfully to you. Let them know that you want to understand their position, but the conversation would go better if they had a respectful attitude. You might even want to give them an example of how they could express their opinion in a way that helps you hear them.

It is one thing to say NO to people, but the greater challenge is to say NO to their own desires. During the early teen years, your son will be tempted with many situations that will require some personal conviction. Drugs and alcohol are the ones we hear about a lot and they are certainly major concerns for every parent. But they aren’t the only ones, either.

I also think the new feelings our sons experience because of the risk/reward system taking hold in their developing brain are a challenge. Dopamine, a chemical in the brain, is one of the reasons your son might have difficulty saying NO to crazy ideas that he comes up with. The opportunity for excitement causes an increase in dopamine in his brain and the result is a wonderful “feel good” experience.

There are many situations that result in dopamine release. Among them is pushing the limits in arguments so you can win, the possibility of winning at something like video games, the opportunity for sexual pleasure, and the list goes on.

Your son will be faced with the challenge to say NO when he realizes that he is going to “feel good” if he says yes. Be aware of the challenges he faces and take the time to let him know that you understand the battle going on inside. Give him guidance as to how he can make good choices when faced with these challenges.

Adolescent boys are hit from all sides when it comes to the many deeply personal obstacles they face on a daily basis. Be sensitive, but also be a good guide. He needs you more now than ever.